“We’ll have to cut this down to a narrower size,” Matt said as he hefted a large sheet of plywood. It was left over from a woodworking project he’d recently completed. He’d almost tossed it, but now he was glad he hadn’t.

Dylan helped him move some things around in the garage so he could wheel his table saw into a space where he could work. A few minutes later they had two long, narrow sheets of plywood that would fit perfectly over the sidelights.

“Grab the hammer,” he said to Dylan. Then, with the two sections of wood in his hands, he turned to go into the house.

“Dad,” Dylan said, his tone stopping Matt in his tracks.

“Yeah?” He lowered his arms so that the edge of the wood rested on the ground, then he turned to Dylan.

With his hands holding the hammer and box of nails, Dylan gestured to Matt’s back with his chin. “Why do you have a gun in the back of your pants?”

He’d forgotten that was there, but after what had happened with Jack, he had every intention of keeping it handy.

Dylan grinned. “Can I have a gun?”

“No,” Matt said without thinking. Then he realized he should probably take some time to teach both Dylan and Kayla how to use his guns. At a minimum, he needed to review gun safety.

At the look of disappointment on Dylan’s face, he smiled. “You can’t have a gun, but I’ll show you how to use it. Okay?”

He thought about Jessica. She wasn’t going to be happy about what he’d just promised.

Not able to worry about that just then, he picked up the wood and carried it into the house, then he and Dylan nailed the boards into place.

It looked eerie and kind of creepy to have wood covering the glass, but if that’s what it took to keep deranged neighbors and anyone else who might wish to do them harm from getting inside—or at least slowing any intruders down—then the boards would stay.

“Dad’s gonna show me how to use a gun,” Dylan said.

Matt turned around to see who he was telling, hoping it was Kayla so he would have a chance to talk to Jessica about it first, but no luck.

“Oh really?” Jessica said, her eyebrows nearly in her hairline as she looked at Matt.

“Yeah,” Dylan said, excitement in his voice. “Then I might get a gun of my own.”

Now Jessica’s eyes widened as she stared at Matt. “Can I talk to you?”

“Yeah. Sure. Let me put my tools away and then we can go into my office.”

After putting the hammer and box of nails in the garage, Matt turned to Dylan. “Let me know if anyone comes to the door, but don’t open it.”

Dylan rolled his eyes. “Of course not, Dad.”

“Thanks.” Matt went into his office with Jessica. She closed the door and sat in his desk chair. He sat in the other chair. “The kids need to know how to use guns safely.”

“That’s not what I want to talk to you about.”

That surprised him. “Okay.”

“What for?” he asked, cutting her off. Would he get in trouble for threatening to shoot Jack?

“I wanted to see if they would answer.”

That’s when he remembered Jack telling them that no one had picked up when he’d called 911. “Oh. And?”

She clutched her hands together. “I tried three separate times and each time all I got was a busy signal.”

She nodded, clearly eager to be proven wrong.

Matt pulled his phone out of his pocket, dialed 911, then put the phone on speaker. A busy signal filled the silence.

Jessica cupped her face with her hands, her eyebrows drawing together. “See?”

Quietly sighing, Matt put his phone back in his pocket.

Knowing they had no one to turn to in a true emergency made Matt feel cut off. And after what had happened with Jack, he was wary to reach out to his neighbors.

Suddenly it didn’t seem so crazy to teach his fourteen-year-old son how to use a handgun.

“What are we going to do?” Jessica asked as her hands twisted together in her lap. “I mean, what if Jack comes back with a gun and forces his way inside?”

“That’s not going to happen.”

His shoulders slumped. “No. I don’t.” Then he straightened in his seat. “But you don’t know that he will, so let’s not assume the worst.”

When they finished speaking, Matt stood, prepared to discuss gun safety with his family.

“Are you ready?” Jessica asked as she stood beside him.

He nodded, not liking that he was being forced to teach his fourteen-year-old son and sixteen-year-old daughter how to use a gun in self-defense. Against neighbors.

Side by side, he and Jessica walked into the family room, but when they crossed the threshold, they found Kayla and Dylan sitting on the couch in the family room with Kayla holding the remote and frantically changing channels.

Kayla turned and looked at him, her eyes wide. “None of the news channels are on.”

“What?” He held out his hand and she gave him the remote. He went to their favorite local channel, but it was showing a sitcom. “That’s weird.” For the last two days, it seemed as if the only thing all the news channels were broadcasting was information about the bird flu. “Maybe people were tired of hearing about the flu.”

Then he went to Fox News. Vertical colored bars covered the screen. They were off the air.

Stunned to see something he’d never expected to see on a twenty-four hour news station, he felt his mouth fall open as he turned to Jessica, who looked just as shocked as he felt.

“It’s the beginning of the end, isn’t it?” she whispered.

He didn’t want to acknowledge it, but he couldn’t deny the obvious. “Yeah.”

The entire book is now available! Click HERE to get your copy. 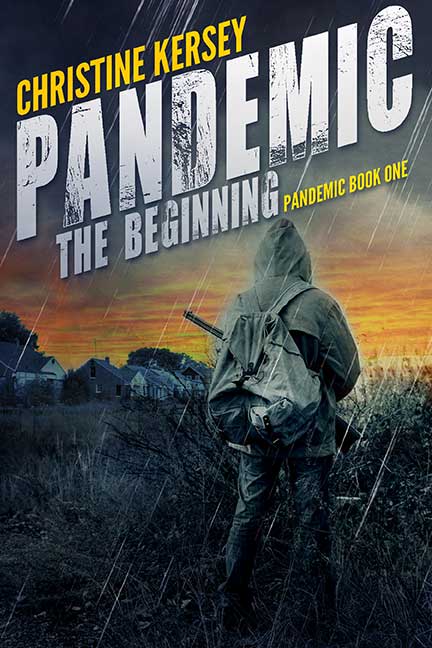