This week I’d like to welcome Indie Chick Heather Marie Adkins. This is her personal story. I read her novel excerpt in the Indie Chicks Anthlogy and then had to buy her book, Abigail, so I could see what was going to happen next! 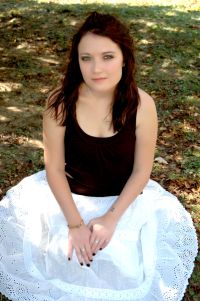 My mom’s career has always been the whirling force of my existence.

She was sworn into the Louisville Police Department on . I was five years old. For the majority of my developmental years, I bounced through a succession of caretakers—my grandmother, my father and stepmother, and a kind woman I called ‘Mama Lo’—while my mom was forging her way through her early years as a rookie officer.

I remember late nights—my mom in her uniform, her gun belt digging into my side as she bundled me into a blanket to carry me to the car. I remember mornings getting on the school bus, knowing Mom would be coming home from work just in time for me to leave. But when I remember these things, they are snippets: Only bits and pieces of the woman who is my mother. Her job was demanding and sometimes, you just have to sacrifice to make your dreams come true.

When I was ten, Mom aced the Detective test and was granted her first promotion. Suddenly, we were buying a new house in a nice neighborhood. I was in middle school, which was awkward enough, and Mom began working 4 pm to midnight.

Thus began my time as a Latchkey Kid.

I rode the bus home from school and let myself into the house around 4:30 every afternoon. Under Mom’s strict instructions, I would check to make sure all three doors of the house were locked and then I would set the alarm.

Until bedtime, I was on lockdown. No going outside—not even to the backyard. No answering the door, no looking out the windows. Just me and the dog: A tiny Shih-Tzu named Cinnamon.

I was kind of an odd child. I didn’t care much for television, though I did love to play Nintendo. I could rock on some Mario Bros. I also absolutely loved to read, particularly R.L. Stine’s Goosebumps and Ann M. Martin’s The Babysitter’s Club.

There is really only so much video gaming and reading a girl can do before she wishes she had another hobby. At least, that’s how it was for me. I was lonely. Monday through Friday, every evening alone…it sucked.

It was around this time that my daddy shared with me a novel he was writing. Daddy is a computer guru who does freelance work, but he writes for fun on the side. “Demigod” was one of the most amazing things I had ever read. Not only was I astounded that my dad had such talent, but for the first time I realized there were people behind the books I liked to read.

Armed with nothing more than spiral-bound notebooks and pencils, I began writing.

Between 10 and 16, I wrote seven full-length novels. Today, I suppose they would be considered Young Adult. Some of them were murder mysteries with strong heroines. Many of them had elements of what today is considered Paranormal Romance. Most of my early influences were from authors I enjoyed: Stine, as well as Richie Tankersley Cusick and Christopher Pike. Somewhere in the midst of all this, my mom bought me a laptop and I transferred everything to digital.

I continued to write during high school, though significantly less once I got my driver’s license. I focused mainly on short stories and built up a vast collection that I ended up losing to the nightmare of an erased floppy disk. I majored in English in high school. Earned a couple college credits. And was told multiple times by various English teachers that I had talent.

After graduation, I went away to college at . My mother had married a great man who was also a police officer. Between the two of them, I was able to go away to school and thus started several years of BAD DECISIONS. I kicked it off right, as most first-time college teens do. I drank too much and partied too hard, not making it to class, much less spending my time writing. Two years later, I came home to with my tail between my legs, no smarter than I was before.

Back at my mother and stepfather’s home, I found the situation to be stifling for the girl who had done what she wanted, when she wanted for so long. I was already rebelling—not phoning, disappearing all night—when a chance encounter on the banks of the brought a man into my life who was not right for me in more ways than one.

Jason was an ex-con and felon. I was the daughter of two police officers. Cue ominous music.

Let’s skip the dirty parts and go to the section where I pack my things and flee into the night like a bat out of Hades. My parents change the locks, I cut off all contact, and hole up in a hovel on

with my friend, Brent. Oh, and in the meantime, my convict boyfriend ends up back in the Slammer.

I bounced around for some time. To an apartment with my cousin, Ryan. Then to a big, fancy house outside of with Jason’s family. After severing ties with them, I rented a tiny studio apartment downtown. I moved a couple more times, losing money (and myself) in the process.

Not once in the years I spent chasing something, anything in did I sit down to write.

In January 2008, I was in debt and barely hanging on to the apartment I was renting. My good-for-nothing, pot-smoking boyfriend-of-the-moment wasn’t helping with the bills because he couldn’t hold a job. My car was on the verge of repossession. I was going nowhere; the only positive thing I did have was that I was talking with my parents again.

Then the life-shattering, earth-moving event. In , January 31st, my cousin Cory—a Marine, a firefighter, one of my best friends—was killed in a car accident. He was 25 years old.

My mom drove from to the minute she heard. She told me it was because she didn’t want me to be alone, nor did she want to tell me something so sensitive over the phone. That’s just how she is; no matter how terrible a daughter I could be, she always put me first.

Later that same night after she left, I was alone. My deadhead boyfriend wasn’t home, neither was our equally stoned roommate. I was sitting on our single mattress on the floor, looking around our bare room with its one dresser and a floor strewn with clothes. It hit me.

What are you doing? Really?

Was I just trying to prove I could do it on my own? Because I couldn’t. Obviously.

In a flash of grief and pain, I realized my life had spiraled out of control simply because I was too stubborn to admit my parents were right.

I packed my things. My dog and I climbed in the old Jeep. And we came home to .

During the upheaval of moving back, I also found something I hadn’t yet realized I had lost—my writing. Whether it was my grief over Cory or simply returning home, I don’t know—but I started writing again.

Even better…I finished the novels I had started years before and I have started (and finished) even more in the time since.

My mom is a Major with the Louisville Metro Police force—the third highest ranking female on the department. She just celebrated her 21st anniversary this month. I am in a stable, committed relationship with a man who will one day be my husband. We live in a small but nice home—I’m a police dispatcher. He’s a police officer.

I was a latchkey kid and because of it, I am now a writer. I am the daughter of a female police officer, and because of that, I’m a stronger, better woman.

***
This is one story from Indie Chicks: 25 Women 25 Personal Stories available on Amazon and Barnes & Noble. To read all of the stories, buy your copy today.
Also included are sneak peeks into 25 novels!
My paranormal romance novel, Abigail , is one of the novels featured.
All proceeds go to the Susan G. Komen Foundation for Breast Cancer. 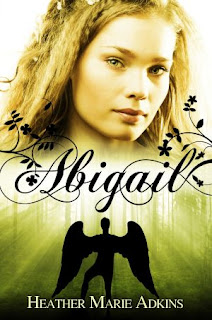